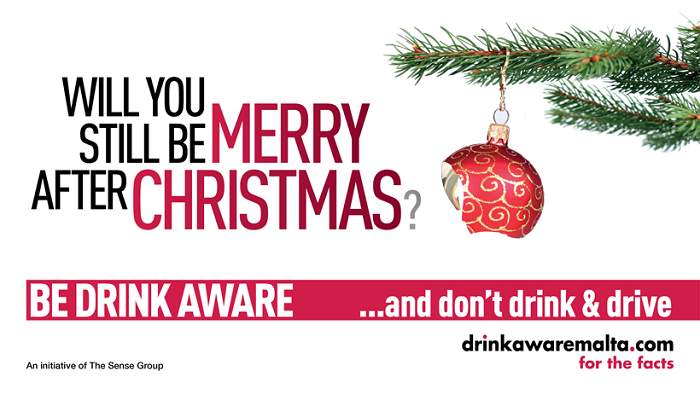 The campaign invited readers during the festive season to reflect upon the drastic changes that thoughtless alcohol abuse could bring to themselves and their loved ones.

While the number of road fatalities in Malta fell slightly between 2017 and 2018, more action is needed to maintain and accelerate this trend. This was the reason why, besides urging caution, the campaign – which was organized by The Sense Group (TSG) – encouraged people to keep an eye on family and friends who might not be aware that their alcohol habits could be an accident waiting to happen.

On Facebook, the best performing video posts reached between 94,651 and 137,223 people. The campaign was also covered by 14 print and online press articles and visible on billboards across Malta.

Founded in 1997 by producers and importers of alcoholic beverages, TSG promotes programmes and practices that create a positive role for alcohol in Maltese society and addresses issues related to alcohol abuse and misuse. TSG provides useful information on the effects of alcohol, tips and guidance for parents, and how to enjoy alcohol in moderation. On Drinkawaremalta.com, you can find practical steps to avoid alcohol-related harm such as pacing drinks with periods of abstinence, alternating with water, eating before and during the event, and avoiding mixing different types of alcoholic drinks.